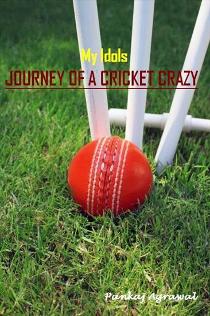 It was a World Cup match between India and Australia at Brisbane on March 1, 1992.  The Australian skipper Allan Border was batting and he gave charge to Kapil Dev but miscued the shot. The ball was landing short of long off.  Border probably was confident that he was safe and was looking for a couple of runs out of it, but a young lad was charging in from long off to grab the ball, which looked like a very improbable catch. He dove and grabbed the ball just inches above the ground. The catcher was Ajay Jadeja and he was fielding for his country for first time in his career. I was watching the game on the TV in a jam packed common room in my hostel. Everybody was stunned, as during those days, Indians were not known for such acrobatics on the field.  This catch, along with Kapil’s catch to dismiss Viv Richards in the 1983 World Cup final, are the two most memorable catches by Indians on the field.

My admiration for Jadeja started that day itself as he looked like a very special performer on the field.

If you look at his overall credentials as a cricketer, then he was just an ordinary player or may be even below par. But there is much more beyond numbers in the case of Ajay Jadeja. Ajay Jadeja remained a top class entertainer on the field throughout his career.  He has his very own style of presenting and carrying himself on the ground. This ever smiling cricketer used to bring much joy and pleasure to his team and supporters, while batting, fielding or even bowling.

Most of his fans recall him by just two performances. One has been mentioned above, and other was his whirlwind knock against Pakistan in 1996.  That was a high voltage quarter final match between India – Pakistan during the 1996 World Cup at Bangalore. India was batting first and after 47 overs, the Indian total was 236. Everybody was expecting some 25-27 runs in the last three overs, and there was an anticipation of a final total of around 260.

There are players who are among the best batsmen, bowlers or fielders. There are great all-rounders and captains. There are trend setters, who inspire generations to follow them. But there are people, who are not the greatest of players but they are the only envoy of their respective classes, and I believe that Javagal Srinath is one of this kind.

He was not greatest of fast bowlers this game has seen, but arguably he is the only Indian bowler who can be tipped as a genuine fast bowler. Over the past three decades, India had good strike new ball bowlers like great Kapil Dev and more recently Zaheer Khan who is still playing. There have been good swing bowlers of the ball like, Manoj Prabhakar and Irfan Pathan. There are hugely talented youngsters like Sreesanth & Ishant Sharma.  Apart from this, there are pace bowlers who in patches performed very well. Chetan Sharma, Venkatesh Prasad, Irfan Pathan, Ajit Agarkar, RP Singh, Ashish Nehra and Munaf Patel are few such names. But none of them could generate the fearsome pace, which Srinath produced at the peak of his career.

Without any scope of argument Kapil, Zaheer and Srinath are best pace bowlers this country has produced. Their strike rates (Wicket/Match) are more or less same but Kapil is notches above Zaheer and Srinath, largely due to huge nos. of wickets he took, and his awesome strike rate during first 60-70 Tests he played. Zaheer is still in game and he has a good strike rate. Zaheer has already surpassed Srinath as far as Test wickets are concerned and heading towards 300 wickets mark in Test Cricket.  But undeniably, Srinath was far quicker than these two. Another great feature about Srinath, which makes him different, is that he was quite effective on dull pitches of sub-continent as well. His strike rate in India is at par with his strike rate overseas and he produced many match winning spells in India as well.

When I started taking interest in game during early eighties, I noticed dominance of fast bowlers on the game and almost always very regretfully witnessed Indian batsmen struggling against quality pace bowling. In 1982-83 during India’s tour to West Indies and West Indies tour to India after the 1983 World Cup, I saw Indian batsmen in complete despair against pace of Marshall & Company. Hero of 1983 World Cup Mohinder Amarnath, who otherwise was known for his ability to negotiate pace bowling effectively, could score one run in six innings during home series with West Indies in 1983.

Much before that, during Indian tour to West Indies in 1976, Indians were simply devastated by West Indian pace bowlers. At Kingston Jamaica, during the first Indian innings Gaekwad, Vishwanath and Brijesh Patel received fierce blows from hostile West Indies pace attack on fast pitch and they were ruled out from the game. Captain Bedi was so frightened that he and Chandra did not come out to bat at all, as Bedi wanted to keep his main bowlers intact.

Because of this, Indian innings was finished after eight wickets. In second innings, Indian innings came to end with fall of fifth wicket at 97. Gaekwad, Vishwanath and Patel were retired hurt and again Bedi and Chandra did not come to bat.

In 1962, career of Nari Contractor was over in a flash when he received a life threatening blow on his skull on the bowling of Charlie Griffith. He almost lost his life actually and could only be survived after multiple surgeries.

Even Australians mastered this art so very well and their bowling line up was adorned by likes of Lillee, Thompson, and Hogg during early eighties.

(My Book ‘My Idols – Journey of a Cricket Crazy’ is available as ebook and paperback at www.pothi.com and also as Amazon.com)

About Pankaj Agrawal 11 Articles
Pankaj Agrawal is an IIT graduate professional with deep passion for writing. He is a sports enthusiast and historian with keen interest in history, philosophy and mythology as well. He blogs regularly on these topics. He can be contacted at twitter - @pankajag1973